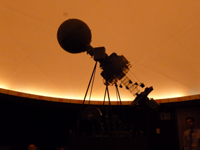 In 1961, at the beginning of the Space Age, when everyone’s attention was turned skyward, a new planetarium opened at the Loomis School as part of the newly built Clark Science Center. Considered state-of-the-art for a school and featuring a Spitz projector, the planetarium was operated under the capable hands of science teacher Squirrel Norris,  providing a popular educational sky show for students.

Now, more than 50 years later, the O’Brien Planetarium, named in 2008 by Michael O’Brien ’72 in honor of his parents, has a new projector and software programs designed to excite wonder about space, while offering cross discipline education for all areas of the science department. Science teacher Ewen Ross explained that, working in concert with the planetarium’s original Spitz projector, the newly installed projector and software programs provide teachers and students with a range of viewing options, from the exploration of the solar system to 3D software programs that study DNA code from all angles and can be viewed on the larger screen that the planetarium dome provides.

Located on the first floor of the Clark Center for Science & Mathematics, the 18-seat O’Brien Planetarium, its dome, and its projectors provide a realistic, precise image of the universe and is relatively easy to operate and highly versatile. Science teacher Alice Baxter, a long-time proponent of the planetarium, is thrilled at the new interest and flexibility of the planetarium. “We have grown very attached to the Spitz projector and its many uses and we don’t want to lose it,” she observed. With the Spitz, the zodiac timeline of the movement of the sun, moon, planets, and nearby galaxies can all be shown on the dome, along with views of the universe eons ago and into the future.

At the same time, the new projector and software supplement teaching with the Spitz projector by allowing teachers to project more modern programs on the dome screen. “It is a viable educational tool,” noted Ewen. “Teachers can use open programs for the planetarium such as Stellarium, or WorldWide Telescope that enable classes to explore the universe through 3D navigation from telescopes around the world,” said Ewen. “In addition, we can record findings and play them back.” The new software programs include astronomy-based programs, such as “Take a Trip on a Mars Lander” as well as studies of telescopic lenses that can be used in physics classes and history software to show what the skies looked like hundreds of years ago and how celestial events might have affected history.

“The two systems work together very well,” said Ewen. “It’s a good compromise between functionality and cost, since replacing the Spitz projector with a newer system would be very expensive.” Meanwhile, the science department is looking at investing in more software programs that will further expand the use of the O’Brien Planetarium within the science department, as well as for other teaching programs.