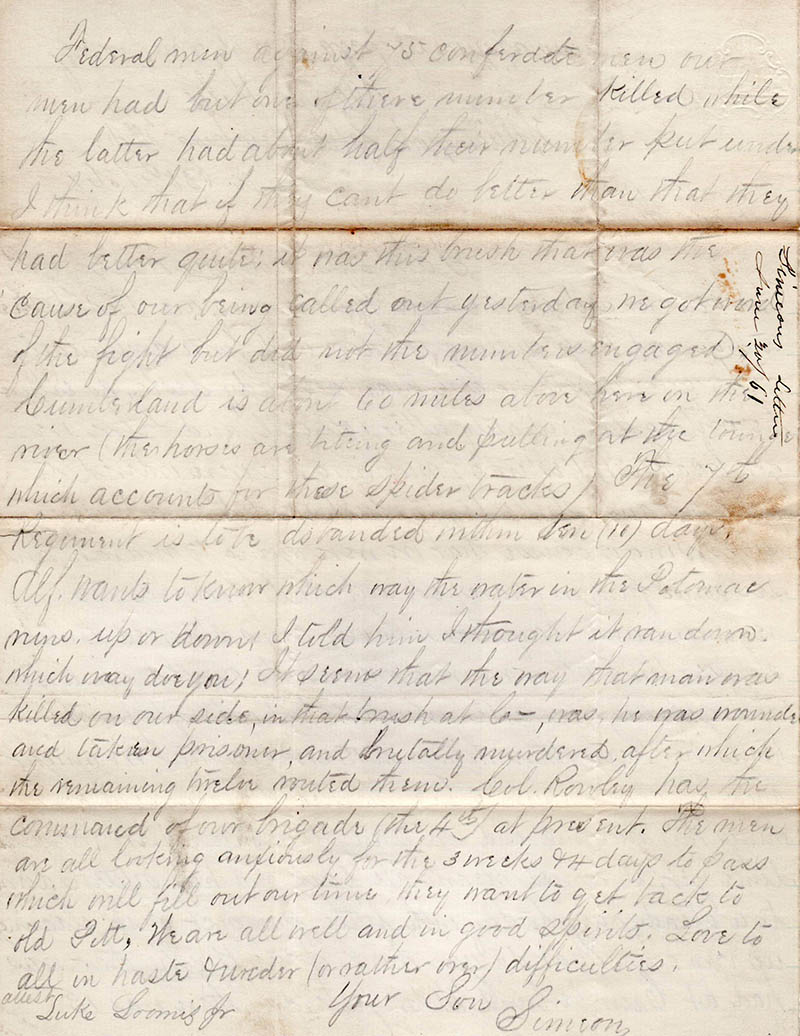 I am sitting in our wagon with the seat for a desk. The four horses are tied to the tongue and keep pulling it back and forth continually which gives anything else than a steady desk, so excuse the writing. Immediately after roll call, and before we got breakfast, yesterday morning, we were ordered to pack up and strike tents which we did in a hurry supposing of course that we were going to march and see some fun, we marched out and formed the regiment and lay with our arms stacked until supper time when we were ordered to our old quarters and got supper, after which we had orders to pitch tents but keep our other things in the wagon that we might move off at any minute; we unpacked the balance of our things this morning and are likely to remain here for some time yet: it rained nearly all last and has settled down to a steady rain to-day with little prospect of its clearing up very soon. What do you think of the Brush that was had at Cumberland, Md. Yesterday, there was 13 Federal men against 75 Confederate men our men had but one of there number killed while the latter had about half their number put under. I think that if they can’t do better than that, they had better quitr: It was this brush that was the cause of our being called out yesterday, we got word of the fight but did not the numbers engaged. Cumberland is about 60 miles above here on the river (the horses are biting and pulling at the tongue which accounts for these spider tracks) The 7thRegiment is to be disbanded within ten (10) days. Alf. wants to know which way the water in the Potomac runs, up or down: I told him I thought it ran down. Which way do you? It seems that the way that man was killed on our side, in that brush at C--, was, he was wounded and taken prisoner, and brutally murdered, after which the remaining twelve routed them. Col. Rowley has the command of our brigade (the 4th) at present. The men are all looking anxiously for the 3 weeks and 4 days to pass which will fill out our time, they want to get back to old Pitt. We are all well and in good spirits. Love to all. In haste & under (or rather over) difficulties.