A Stitch in Time 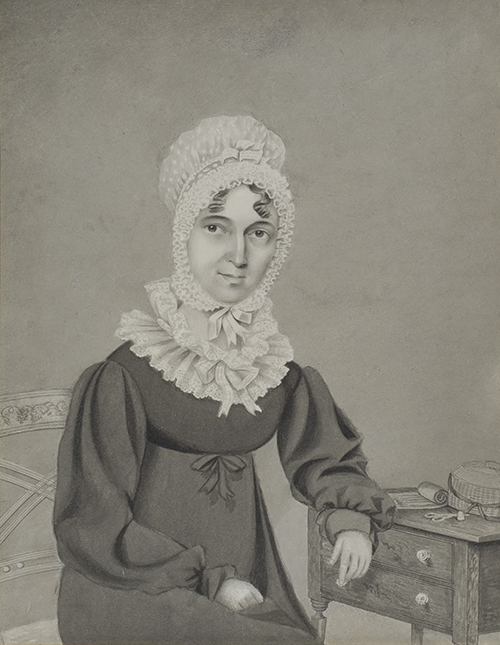 In 1933 Windsor celebrated its tercentenary. A parade wound through the town streets on September 26, and its 44 history tableau floats recounted vignettes of local history. The Chaffee School contributed a float: a scene from James and Abigail Chaffee Loomis’ home. In honoring their school’s namesake and the parents of the Loomis Institute founders, the Chaffee girls and history teacher Mildred Finley depicted Abigail with five children seated near a hearth. The float’s actors dressed in plain dark costumes often incorrectly associated with Puritan times. Artifacts, including an iconic spinning wheel, anchored the tableau in the Colonial Revival, an early 20th-century movement evoking an impressionistic — not accurate — view of colonial American life. As this scene rolled down the parade route on the back of a flatbed truck, the events of Abigail Loomis’ life blurred into monolithic “ye olde days.”

Abigail was a lifelong Windsor resident (1787-1867), daughter of a well-respected doctor and wife of an influential businessman. She raised six children. Upon her husband’s death, she received her share of his estate: her dowry, furniture, real estate and a cow. Little else is recorded in the local documentary record, so it’s no wonder that Mrs. Finley and her students relied on what they imagined — heavily influenced by the nostalgic Colonial Revival — about her daily life.

My own attempts to learn about Abigail Loomis left me in much the same position as Mrs. Finley’s. But a trip to Bethlehem, Pennsylvania, this spring changed all this. Abigail journeyed there 108 years ago to join the Moravian Female Seminary, the oldest boarding school for girls in America. Her experiences can be pieced together from seminary records.

Abigail left her home on Windsor’s Palisado Green in June 1799 with her cousins, Hanah and Dolly Hooker. They negotiated the 200-mile trip to Bethlehem in a series of stage coach jaunts, each stop taking them closer to the religious community that 14 years earlier opened its school to non-Moravian girls. Three other girls from the Hartford area entered that year along with students from Philadelphia, New York, Georgia, South Carolina and St. Croix. One father noted he was “really of the opinion that Bethlehem is unrivalled in the United States as a place for female education.”

When Abigail arrived in Bethlehem, she took her first step into the Moravian world by donning the closely fitted white cap, tied with a pink ribbon, required of all girls. Teachers at the school emphasized frugality, economy and humility. They taught with compassion and gentleness, core values of their religion. The school’s Conditions of the Boarding School asked students “to behave towards one another with love, kindness, politeness, manners, forbearance … endeavor to show an amiable and sweet temper even when you have been offended, and a readiness to forgive others, and to acknowledge your own faults!”

The ringing of a bell woke the girls each morning, and silence was observed as they prepared for their day and walked to breakfast. “Good order” in the classroom was expected and “moderation” in exercise and play was encouraged. From time to time, the students attended Moravian worship. Every day they engaged in morning and evening prayers, sometimes accompanied by instrumental music and singing. It was hoped that each girl would end the day with a “sweet sense of His presence in [their] hearts.”

The girls studied reading, writing, German, grammar, history, geography, arithmetic, knitting and plain sewing. For an extra fee, students took instruction in music, drawing or needlework — arts that Moravian society nurtured in female members. Abigail and her cousins studied needlework with Maria Rosina Schulz, an accomplished needleworker. While the Hooker sisters seem to have excelled in this course, based on the number of projects and supplies their teacher prepared and designed for them, Abigail’s list of work was modest and suggests that she entered as a novice in fine embroidery. During two years she silk embroidered one work bag, one small “framing pice” [sic], a larger embroidered piece embellished with gold- or silver-toned spangles, and pincushions. Hanah and Dolly worked large and complicated projects at a hearty pace. Perhaps Abigail made up for her lack of productivity with painstaking work inspired by Sister Schulz’s teachings.

Abigail and her cousins left the seminary in June 1801. One historian noted that students at the seminary were “intellectually cultivated and spiritually encouraged” and returned home a far cry from the young girls they had once been. Since visits home were strongly discouraged, the girls had not seen Windsor or their families in two years. The stuff of their everyday life had become interactions with friends from places far and wide, missionary reports from remote South American outposts and Moravian traditions such as the celebratory meals known as love feasts.

Four years after returning from the seminary, Abigail married James Loomis. Itinerant artist T.H. Wentworth drew a pencil and ink portrait of Abigail on February 16, 1822. He depicted an elaborately capped and ruffled Abigail leaning against a sewing table and near a collection of needlework tools. There is no spinning wheel in sight. The needlework tools might suggest Abigail’s embroidery skills. Or perhaps they are subtle clues about the extraordinary influences Abigail encountered on her journey to womanhood.

Karen Parsons is archivist and teaches history. She is grateful for access to the records of the Female Seminary in Bethlehem, which are held at the Moravian Archives, Bethlehem, Pennsylvania.