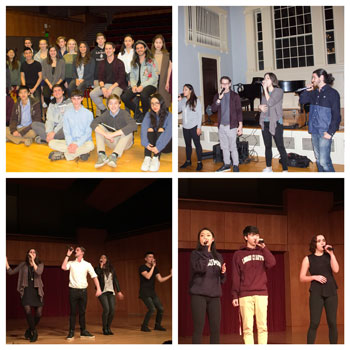 Backtrack Vocals, a New York City a cappella group that has amassed a worldwide fan base, worked with student singing groups and performed in concert last week during a two-day visit to Loomis Chaffee.

The five Backtrack musicians coached students involved in the A Cappelicans, Musical Revue, and a new student a cappella group, Take Five; worked with the Concert Choir and Chamber Singers; and lent their expertise to the Digital Music class. They also presented a performance of popular and holiday music for the community on Friday evening.

During their high-energy performance, Backtrack welcomed several students to the stage to join in two of the musical numbers. Seniors Logan Katz, Alexa Kim, Cameron Purdy, Josh Ryu, and Noah Yoon, all of whom are leaders in student music organizations at Loomis, contributed their voices to renditions of "Sweet Caroline" and "Beat It" to the delight of the near-capacity crowd in Hubbard Performance Hall.

Backtrack's 90-minute set featured a range of genres and eras and included a compilation of songs by popular artist Sia as well as a compilation of Beethoven compositions. The performance also featured a "beatbox battle" between Logan and Backtrack vocalist Andrew John Kim. The audience joined in a "Mad Libs"-style musical improvisation of "Santa Claus Is Coming to Town" with random lyrics provided by the audience, and a sing-along version of the Motown standard "Ain't No Mountain High Enough."

"I really loved the interactive addition to their performance," said sophomore Anya Sastry, who attended the Friday evening event.

The five members of Backtrack, Mallory Moser, Melissa Jordano, Mike Hinkle, Andrew John Kim, and Johnny Buffalo, are all individually accomplished musicians and performers. Known for their entertaining videos, Backtrack has garnered more than nine million views and 105,000 followers on YouTube. The ensemble has earned awards at international competitions and has performed on stage at the Apollo Theater and Carnegie Hall in New York.

In addition to their music, Backtrack's members are passionate about inspiring and educating young people interested in the performing arts. They have served as judges at a cappella competitions, such as the Wyvern International A Cappella Festival in West Hartford, and conducted music workshops for young people in schools and other community organizations.

Loomis' student a cappella singers, the A Cappelicans, will present their Winter Concert in Founders Chapel on Tuesday, December 12, at 7:30 p.m. The public is invited to attend and admission is free of charge.

Backtrack Vocals' visit was made possible with support from the Joseph Stookins Lecture/Visiting Musicians Fund and a gift from Jed Bradley ´02 in support of the A Cappelicans and Musical Revue.