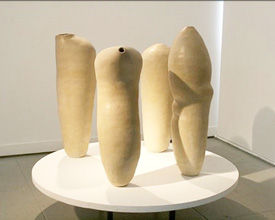 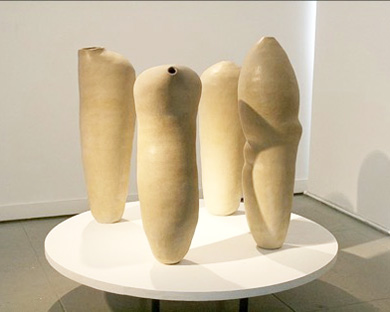 Ceramics, sculpture, and multimedia artist Joan Harmon spent several days last week working in and among the students and faculty of the Richmond Art Center as a Visiting Artist.

During her stay, Ms. Harmon worked on some new forms in porcelain and tried her hand at printmaking techniques in the print shop.

"I don't have a lot of experience in printmaking, so it's nice to be able to try out new art forms when I have an opportunity," she said.

A resident of New York City, Ms. Harmon teaches at the City University of New York and is an adjunct instructor and art director in mask-making and large scale puppetry at New York University's Florence campus.

Ms. Harmon was awarded an artist residency near Naples, Italy, from Kultursciok Arts Collective, and an honorarium from Black Rock Arts for her work at Burning Man, in Black Rock City, Nevada, where she created three large-scale sound sculptures. In 2015, she was awarded a six-week fellowship from the Creative Glass Center of America and has received numerous international and national awards. Ms. Harmon earned a bachelor's degree from the California College of Art and a master's degree in drawing and sculpture from Rutgers University. Her work has recently been shown at the Epperson Gallery of Ceramic Arts, the Loveland Museum Gallery, the Lewis Art Gallery, Millsaps College, the Governors Island Art Fair, and Loomis Chaffee's Sue and Eugene Mercy Jr. Gallery. For more information, connect to the artist's website.

Ms. Harmon's visit to Loomis Chaffee was made possible with support from Adolf and Virginia Dehn.