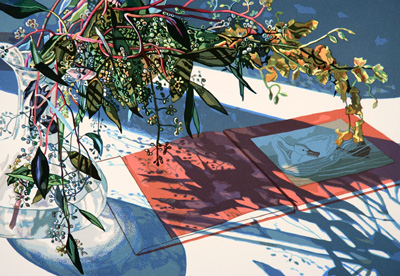 Artist’s Proof: Jane Goldman’s 40 Years of Printmaking, an exhibition of work by printmaker, painter, and ceramics artist Jane Goldman will be presented in the Sue and Eugene Mercy Jr. Gallery in the Richmond Art Center from November 1 through December 7. A Loomis Chaffee student AP Still Life exhibition will be held concurrently in the Barnes and Wilde Gallery.

An opening reception will be held in the Richmond Art Center on Tuesday, November 1, from 6:45 until 8:45 p.m. The public is invited to attend, and admission is free of charge.

“I formed my response to the visual world growing up in Dallas in North Central Texas — a land of light, flatness, and air. Taking light and the natural world as subjects, I work from a combination of free association and direct observation, compelled by the interplay of light and shadow that creates meaning, and am equally interested in looking inwards to depict incorporeal works of imagination that can’t be seen by observation,” says Ms. Goldman in her artist’s statement.

Ms. Goldman is an owner of the Mixit Print Studio, an open-access professional printmaking studio housed in the former Mixit Soap factory in Somerville, Mass., which she owns and operates with Catherine Kernan and Randy Garber. The three studio owners exhibited works in the Mercy Gallery from February through April of this year.

Ms. Goldman is known for her large installation at Boston’s Logan Airport. She received a bachelor’s degree from Smith College and a master’s of fine arts from the University of Wisconsin. She has taught at Massachusetts College of Art and Design, the University of California Los Angeles, Rice University, and the University of Hartford, and she has been a visiting artist at Harvard University and Artist Proof, South Africa. Ms. Goldman has received fellowships from the Ballinglen Arts Foundation in Ireland, the Oberpfalzer Kunstlerhaus in Germany, and the Cité des Arts in France.

For more about Ms. Goldman and her work, connect to the artist’s website.