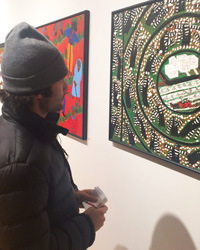 An evocative exhibition of paintings on tooled leather by Winfred Rembert, an African-American artist who was born and lived in the segregated South, opened in the Sue and Eugene Mercy Jr. Gallery in the Richmond Art Center on Tuesday, February 21, and will be on display through April 14.

"The same few words kept cropping up in conversation when describing the paintings: vibrant, authentic, visceral," writes senior Ilya Yudkovsky who attended the opening reception on Tuesday. "Mr. Rembert's art, created on an unconventional medium — tooled leather — flaunts bright colors that accentuate figures truly captured in movement. The gut-level reactions that his art triggers were evidenced in the faces and comments of all the visitors," he adds.

Mr. Rembert's work draws on a life experience that many of us cannot begin to comprehend, notes Ilya. These experiences include working in cotton fields in the Jim Crow-era South; protesting during the Civil Rights Movement; surviving prison and an attempted lynching; and being forced to work on a chain gang as punishment. Mr. Rembert's harrowing experiences are reflected in his work, and observers said they were moved by the emotions his work elicits.

Lilian and Nancy, two of Mr. Rembert's daughters, attended the reception on Tuesday evening. Mr. Rembert had planned to attend but was unable due to a recent fall. His daughters said Mr. Rembert speaks often about his experiences during the Civil Rights Movement, but always makes sure to speak with a tone of hope, encouraging them to "be who you are." According to his daughters, Mr. Rembert's optimism and unwavering positive outlook are reflected in his art and in his life. His daughter Lilian said personal oral histories and story-telling have played an important role in their family life.

The opening reception in the Mercy Gallery was well-attended by students and faculty as well as local media representatives and community members.

Connect to the Mercy Gallery page on the Loomis Chaffee website for exhibit information and gallery hours. An exhibition of student work is on display concurrently in the adjacent Barnes & Wilde Gallery.