Boys Lacrosse Soars Past Williston
May 10, 2019 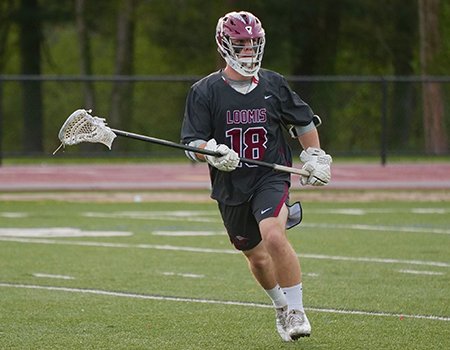 The boys varsity lacrosse team defeated Williston Northampton 14-10 on Wednesday, May 8, on the Upper Turf, earning the Pelicans' 11th win of the season, the most wins in a season for the team since 2008, and the most under head coach Bill Lee.

Last year when these two teams faced off, the Pelicans struggled against the Wildcats' zone defense and were able to score only seven goals in the game. This year the Pelicans came out firing and broke through the Williston zone defense to take a 6-1 lead going into the second quarter.

In the second quarter the Pelicans built an 8-2 lead, but Williston rattled off four straight goals in the third quarter to make it a two-goal game. Sophomore Evan Stowe responded with a quick hat trick to bring life back into the Pelican squad, and thanks to another big goal from senior Sam Tomson with his weak hand, the Pelicans were able to walk off the field victorious.

For details on all the goal scorers, read the team's game recap.

Up next, the Pelicans have a busy weekend as they travel to Northfield Mount Hermon on May 10 for a Friday night matchup at 5:30 p.m., and then play the next day at Taft at 4 p.m.