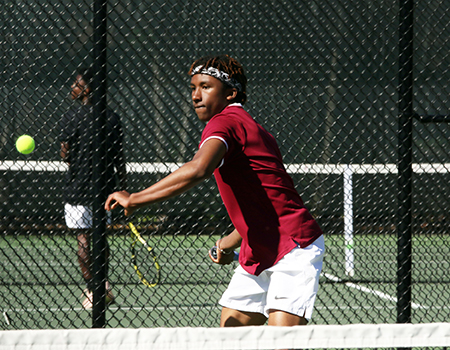 The boys varsity tennis team defeated Kent 7-0 on Wednesday, May 22, to finish off the season on a high note.

The team got off to a fast start with the efforts of the No. 1 and No. 2 doubles teams. In their final match as doubles partners, seniors John O'Brien and Liam Scott played strong, working together well to dismantle their opponents with precision hitting and strong net play.

In singles play, the boys were solid up and down the ladder, with everyone winning in straight sets. It was the team's strongest win of the season. Sophomore Langston Woody was dominant at the service line, delivering powerful serve after powerful serve, while freshmen Gavin Anderson and Ting-Yo Tan played like veterans, staying calm after a couple of tough bounces to close out their final matches in their rookie seasons.

The team gives a big shout-out to O'Brien and Scott, who will graduate on Sunday, May 26. "They served as a strong presence in the lineup, providing steady play throughout the year, and most importantly they were great teammates and role models to a very young team," said head coach Jed Stuart. "We wish them the best of luck in the future; they will be missed."