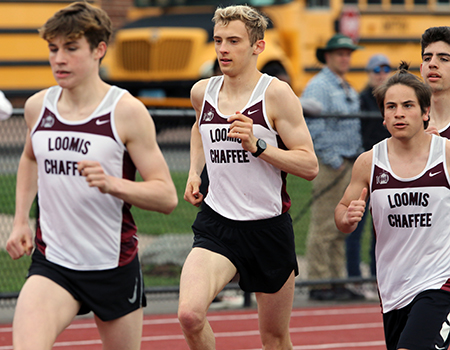 The boys track and field team defeated Phillips Andover, Northfield Mount Hermon, and partial teams from several other schools on Saturday, May 4, at NMH to cap off an undefeated regular season.

With a big field that included athletes from Choate, Avon Old Farms, and Chase Collegiate as well as full squads from Loomis Chaffee, Andover, and NMH, team depth was especially important in the meet as six athletes in every event scored points. Thus, a team could gather large numbers of points in each event depending on how their athletes placed. This made for a lot of back-and-forth action in the scoring.

The running events got off to a fantastic start with a record-setting run by junior Matt Farrell in the 1500 meters. Farrell's time of 3:57.7 broke the school record in the event by nearly two seconds.

Farrell's effort was followed by an impressive performance from senior Sam Winiarski, who won the 400-meter race with a personal-best time of 51.7 seconds. Junior Seth Robertson also contributed important points to the meet when he won the 300-meter intermediate hurdles. For a complete list of athletes who accrued points for the Pelicans, visit the game recap on the boys track and field team page.

The win was a complete team effort for the Pelicans, from the boys who brought the blocks to the athletes who earned gold and from the Pelicans that cheered on their teammates throughout the meet to the competitors who clawed their way to earn a point with a sixth-place finish. The meet also concluded the team's first undefeated regular season since 2013, making the victory special for all the athletes involved.

Up next, the Pelicans will compete in the Founders League Championship on Saturday, May 11, at Hotchkiss.