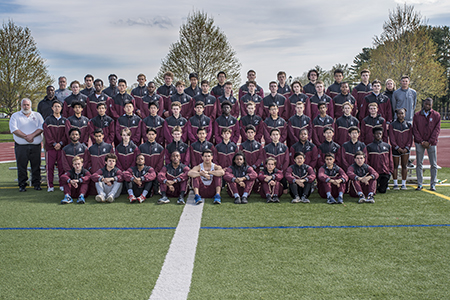 The boys track and field team defended their Founders League title on Saturday, May 11, at the Hotchkiss School, for their fourth straight title and their ninth Founders League crown in the past 10 years.

While the main reason for the Pelicans success was their depth, three individuals truly shined on the day. Senior captain Tyler Delgado repeated as the javelin champion, and also won the shot put and the long jump events, while junior Matt Farrell defended his 1500-meter and 3000-meter titles. Junior Seth Robertson put together an epic come-from-behind victory in the 300-meter intermediate hurdles. This victory combined with Seth's second-place finish in the 110-meter hurdles made the difference for Loomis.

Their performances at Hotchkiss will have them competing against the best teams in New England at next weekend's Division I New England Prep School Track Association championship on Saturday, May 18, at Loomis Chaffee.

Full results from the meet have been posted online, and for a complete list of athletes who recorded points for the Pelicans visit the boys track and field team page.

Members of the team will travel to Trinity Pawling on Wednesday, May 15, to take part in the Founders League JV championship, before they host the NEPSTA Division I championship at the Wilde Track and Pratt Field.