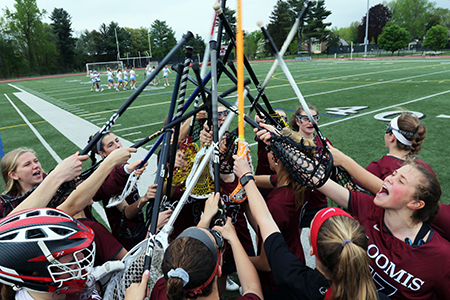 The girls varsity lacrosse team topped Kent 18-4 on Wednesday, May 22, in the final game of the 2019 season and captured the team's fifth straight Founders League title and an overall record of 12-4.

Despite a close score going into the second half, the Pelicans took control of the game. Thanks to the work of junior Jenna Donohue and sophomore Grace Murphy, who combined to win 85 percent of the draws on the day, the team was able to control possession and take its time on offense in the second half, finally breaking through the Kent defense and scoring a slew of goals.

As if it were meant to be in the final game of the season, each Loomis Chaffee senior found the back of the net. "Seniors Jacqueline Cleary, Charlotte Fanning, Maddie Corsetti, and Abby Kuhns leave a legacy of pride, tradition, and love," according to head coach Julie Wadland.

Their four-year record stands at 51-13, and the team's goals-against average for the 2019 season was just 5.44, a reflection of these seniors' leadership as well as the entire team's stalwart defensive unit all season.

Every Pelican saw action in the game as well, with goals chipped in by freshman Brooke Barry, sophomore Alex Darrah, junior Chloe Behringer, and sophomore Taylor Guarino. The defense also had a great day, thanks to the poise and composure of sophomores Elinor Keehn and Selia Coady and freshman M.K. Briglio.

The Pelicans look forward to being led by 2020 captains-elect Jenna Donohue and Sadie Gardner.