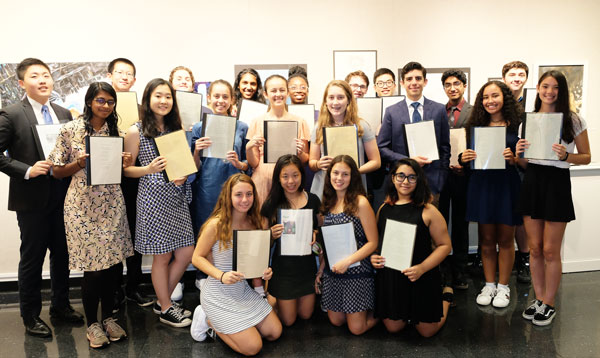 Loomis Chaffee celebrated literary arts on the Island on Tuesday, September 18, with the opening of an Emerging Writers exhibit featuring the work of 25 student writers.

Launched in 2016 by Writing Initiatives at Loomis and The Loom, a student literary publication, the Emerging Writers Program invites student writers of all inspirations to submit proposals for independent development during the summer. At the end of the summer, the Emerging Writers return to Loomis to share their work, including a display that coincides with the opening Richmond Art Center (RAC) visual arts exhibit.

This year's displayed selections spanned several literary genres and featured the writing of students from across all class years, including two freshman participants and several returning writers.

The authors and poets were feted at a reception in the RAC on Tuesday alongside three other art exhibit openings — a display of art work by faculty, staff, and other adult members of the Loomis Chaffee community; a student Emerging Artists exhibit in the Barnes & Wilde Gallery, and the Seventh Annual Connecticut Printmakers Invitational in the Sue and Eugene Mercy Jr. Gallery. All of the exhibits will be presented in the RAC through the end of October.

"I am always deeply impressed by the work that our students produce," said Kate Saxton, English teacher and faculty advisor to The Loom. "The pieces displayed at exhibit are a testament to the passion and engagement of our young writers and artists, who deserve to be commended for the time and creative energy that they dedicated to these projects over the summer."

Sally Knight, director of Writing Initiatives at Loomis, remarked on the "diversity of voice and style" and the variety of genres in the collective works of writing.

Senior Ashley Chung was among the participating writers. "I am immensely grateful to the Emerging Writers program for giving me the opportunity to polish and present my writing, and helping me to grow as a creative writer," she commented.

"Seeing other students' literary art at the gallery truly inspired me as well as gave me a peek into the depths of creativity the Loomis community has to offer," remarked sophomore Andy Cao, another Emerging Writer.

Connect to read excerpts from this year's Emerging Writers' work.

Connect to the webpage for Writing Initiatives at Loomis Chaffee.