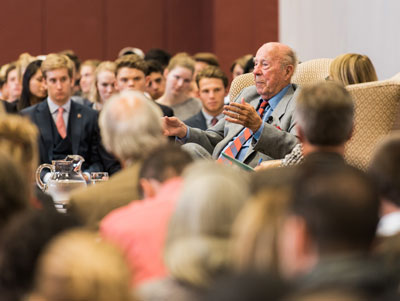 Former U.S. secretary of state George P. Shultz '38 paid a return visit to the Island for a question-and-answer session with Head of School Sheila Culbert in front of an all-school audience Friday afternoon.

During the 45-minute conversation, Secretary Shultz shared stories and insights from his work with five U.S. presidents, his knowledge and opinions about issues at the forefront of current public discourse, and reflections on his time as a Loomis student 80 years ago.

To Dr. Culbert's inquiries about present-day issues involving Russia, North Korea, Mexico, and other countries, Secretary Shultz offered seasoned insights from his experience with these international players as a diplomat, public servant, and economist at the highest levels. "Disruptive," for instance, was his response, before elaborating, when Dr. Culbert asked him about Russia's role on the world stage today. When asked about the tense relations with North Korea, Secretary Shultz acknowledged that we have reason to be concerned and vigilant because North Korea has both nuclear weapons and ballistic missiles.

"You never point a gun at someone unless you are willing to pull the trigger," Secretary Shultz said, sharing a lesson he learned in boot camp that holds true in foreign policy: There must be no "empty threats," he said, or credibility is lost.

Regarding recollections of his Loomis years, Secretary Shultz said he remembers working hard in a challenging curriculum. He added that playing on athletics teams at Loomis was a lesson in accountability.

"In football, you catch the ball — touchdown! You miss the block, your runner gets creamed," he said.

Before he left the stage to loud applause, Secretary Shultz held up a photo of his 1938 Loomis basketball team and said proudly, "We were 11 and 1," which was the most successful record in Loomis history up to that date.

During his long and distinguished career in public service, Secretary Shultz served as economic advisor to President Eisenhower; secretary of labor, the first director of the Office of Management and Budget, and secretary of the treasury for President Nixon; and on the Economic Policy Advisory Board to President Regan and then as Reagan's secretary of state from 1982 until 1989. In our nation's history, Secretary Shultz is one of only two individuals to hold four cabinet-level positions.

As a result of his service, Secretary Shultz received the Eisenhower Medal for Leadership and Service, the Truman Medal for Economic Policy, and the Medal of Freedom, the highest civilian honor awarded by presidents of the United States.

Today Secretary Shultz is the Thomas W. and Susan B. Ford Distinguished Fellow at Stanford's Hoover Institution, where he is the chairman of the Energy Policy Task Force and a member of both the Economic Policy and Arctic Security working groups.

Secretary Shultz first developed his emerging leadership skills at Loomis, where he served on the Student Council and as chairman of his dormitory student committee. He also competed on the varsity football, basketball, and tennis teams. After Loomis, Secretary Shultz earned a bachelor's degree in economics from Princeton University, served in the U.S. Marine Corps, and earned a doctorate in industrial economics from the Massachusetts Institute of Technology.

After the interview with Dr. Culbert at convocation, Secretary Shultz met with a group of students in the Shultz Fellowship, a bi-partisan, student-led club inspired by Secretary Shultz's legacy of statesmanship and diplomacy. The club meets regularly to discuss politics and current events.