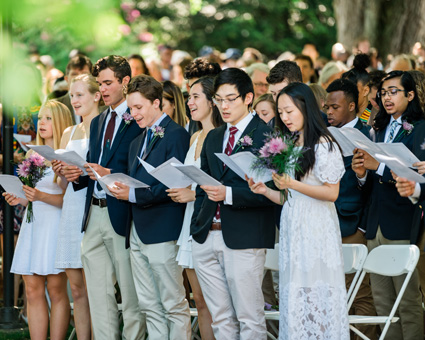 Connect to a gallery of photos from Commencement.

"Every person has a choice of what kind of person they want to become," class speaker Shlok Sharma said in his address to his 199 graduating peers, the Class of 2019, during the 103rd Loomis Chaffee Commencement on Sunday, May 26. "Figuring out [that] person is a challenge," Shlok acknowledged, but the experience at Loomis Chaffee has prepared the class well, he said.

"I can't help but feel excited about what's ahead," Shlok said.

Chosen by his classmates to speak at Commencement, Shlok recounted with humor some of the challenges he faced as an underclassman finding his place in the school community, stepping outside of his comfort zone, and navigating the college application process. His remarks evoked laughter and applause from the crowd of students, faculty, families, friends, and other members of the Loomis Chaffee community, who gathered under the shady trees between the Head's House and the Loomis Homestead for the celebration.

The reflections and thoughts shared by Shlok, Commencement Speaker Jamie Widdoes '72, Head of School Sheila Culbert, and Chairman of the Board of Trustees Duncan A.L. MacLean '90, conveyed the sentiment that there is strength in community and reflected the school's mission of encouraging in students a commitment to the best self and the common good.

In his welcoming remarks, Duncan evoked the legacy of the Founders and their ancestors who settled in Windsor.

"Through their unwavering spirit and generosity, the Loomis family has endowed us not only with the richness of their land, but also the character of their spirit," he said.

Jamie, a renowned director in television comedy, told the members of the Class of 2019 that their education and their work toward becoming their best selves will help guide and sustain them in their lives beyond the Island.

"You will surprise yourself by both what you can achieve and ... your ability to deal with what might not go as planned. But through it all, your Loomis Chaffee experience ... will be with you always," said Jamie, who directs the acclaimed CBS series Mom, now in its seventh season. His early career was launched by his role as fraternity president Robert Hoover in the iconic 1978 film National Lampoon's Animal House.

Jamie, who was active in athletics and theater productions at Loomis, acknowledged the faculty, coaches, friends, and other members of the Loomis community who helped guide and encourage him while he was a Loomis student. The challenges were not unlike those faced by students today: figuring out areas of interest and a course of study to pursue; outgrowing clothes; struggling through math class; and navigating the college application process.

"When you leave here, your lives will take unexpected turns. ... Some will be more momentous and difficult than others, and some will be so serendipitously joyous that you never will have thought them possible," Jamie said.

Commencement culminated with the presentation of diplomas. In a long-standing Loomis tradition, each of the graduates handed Head of School Sheila Culbert a token as he or she accepted a diploma. This year's token was a piece from a puzzle created in the Pearse Hub for Innovation, which opened this year in the Scanlan Campus Center.

In her closing remarks, Sheila congratulated the graduates and encouraged them to go forth boldly and courageously, but with kindness and generosity of spirit.

"You will make a difference in the world, and the choice will be yours as to whether that difference is positive or not," she said.

"May you be blessed with the capacity to seek and nurture experiences which open your mind to wonder and to critical and creative thinking, your eyes to beauty, and your heart to the place and people of our world in need of healing," Suzanne said.

Prize winners from Commencement and Class Night are listed below. Beginning this year the criteria for Commencement prizes are no longer gender-specific.