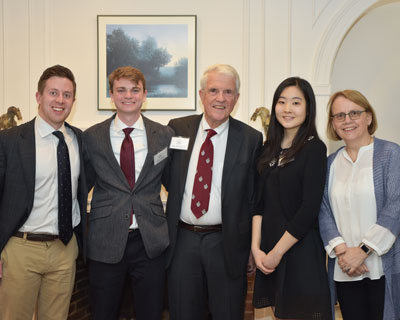 The WALKS Foundation is a collaboration between area independent schools — Westminster, Avon Old Farms, Loomis Chaffee, Kingswood Oxford, and Suffield — and civic partners, and has advocated for academic achievement and accessible education, especially for underserved young people in Greater Hartford, for more than 60 years. Loomis earned the honor of selecting the essay topic and hosting the evening event this year because senior Nezir Alic was the overall contest winner in last year's competition.

This year's essayists were asked to reflect upon the role that the Bill of Rights and other amendments securing individual rights have played in the lives of Connecticut citizens and the evolution of the relationship between those citizens and state and national governments.

Papers written by juniors John Patterson and Ashley Chung were selected as finalists to represent Loomis in this year's contest, and U.S. District Judge Alfred "Tim" Covello '50 served as this year's reader and contest judge.

Head of School Sheila Culbert presented the awards and introduced Judge Covello, who spoke to the students about how to write persuasively and gave each student a handout with practical writing advice. In a society that is becoming increasingly dependent on technology, Judge Covello stressed in his remarks, it's more important than ever to learn and practice effective written communications.

The Constitution Essay Contest is open to history students at the five schools. The two best papers are selected by each school's History Department faculty, and their authors become finalists. The anonymously-submitted papers are then read and critiqued by the contest judge, who chooses a winner and two runners-up. Each finalist receives a Certificate of Merit and a book prize, and the winner receives a cash prize. Each year, a silver tray is inscribed with the winner's name and school and is held at the winner's school until the following year.

For more information, connect to a copy of the program from this year's WALKS Foundation event.