Sunshine and warm breezes greeted Pelicans and their families as they returned to Loomis Chaffee on June 14–16 for Reunion 2019.

More than 650 alumni and their families came from near and far to reconnect with friends, faculty, and other school community members during a weekend full of gatherings, celebrations, presentations, learning, and enjoyment for all. Revelers included alumnae from Chaffee and alumni from Loomis and Loomis Chaffee class years ending in 4 and 9, as well as alumni who graduated more than 50 years ago.

The festivities kicked off on Friday afternoon with a golf outing at Keney Park Golf Course in Hartford; Speaking with Hands: Photographs from the Buhl Collection, an exhibition in the Sue and Eugene Mercy Jr. Gallery in the Richmond Art Center; and student-led tours of the new Scanlan Campus Center and refurbished environs. Al Freihofer '69 and Scott MacClintic '82 introduced Loomis 50th Reunion celebrants to the Pearse Hub for Innovation (PHI) in the campus center, where they participated in hands-on activities.

On Friday evening, Head of School Sheila Culbert hosted a 50th Reunion reception at the Head's House, and the Scanlan Campus Center was the setting for dinners for the Loomis Class of 1964 and the Chaffee Class of 1969. Other alumni arriving on campus Friday evening enjoyed an all-class dinner accompanied by a jazz trio under the big tent in Grubbs Quadrangle, followed by music and dancing featuring the band Lucky 13 and a DJ, a coffee house in Harman Hall for quiet conversation, and "Burgers with Bruno" (longtime faculty member and coach Chuck "Bruno" Vernon) in the quad.

On Saturday morning, CNN political analyst and reporter Chris Cillizza '94 spoke to a large crowd in Founders Chapel about the upcoming presidential elections. The 2020 elections will be as unusual, volatile, and contentious as the 2016 elections, according to Chris, and the disruptive election of President Donald J. Trump is proof that anything can happen in the 2020 election, which has emboldened many more candidates than usual to throw their hat into the ring. After the talk, Chris engaged in a spirited question-and-answer session with fellow alumni regarding his opinions about party nominations, key state elections, interpreting poll data, the rise of global nationalism, and his experiences working in the media.

Following Chris's discussion, Sheila presented her State of the School address in the chapel. She thanked the alumni for their generous contributions to Our Time is Now: The Campaign for Loomis Chaffee, which raised $131 million dollars. The establishment of the Scanlan Campus Center was one of the campaign's major achievements and has transformed life on the Island for the entire school community, Sheila said. She also thanked alumni for their continued support of financial aid to make a Loomis Chaffee education possible for a larger and more diverse student population. Noting that the admissions yield exceeded expectations for the 2019–20 school year, Sheila explained that the school will add temporary modular residences to accommodate the greater numbers of boarding students. The school also will embark on much-needed renovations to the Grubbs Quadrangle dorms in the coming year.

On Saturday afternoon, faculty emeritus James "Grim" Wilson presented "The State of the Union: A Nation Divided" to a large and engaged crowd in the Hubbard Performance Hall. Jim's lecture concerned the deep divisions among Americans and the social, economic, and political changes and resulting upheaval that he argued were historically predictable and that he said both political parties have failed to address. After his talk, Jim moderated a panel discussion with Sandy Cutler '69 and Jason Karp '94 about possible ways to avert a crisis and point the country towards a more secure future. Sandy is a former Loomis Chaffee Trustee and the retired chairman and chief executive officer of Eaton Corporation. Jason, whose service on the Board of Trustees ends this summer, built a successful investment banking career before turning his attention to his passion for health and wellness and establishing Hu Kitchen, a human-focused, healthy food company and restaurant that he runs with his family.

The days' activities also included a lunchtime food truck fair on Grubbs Quadrangle, an afternoon tea with Sheila for Chaffee Class of 1969, a PRISM reception, alumni and alumnae lacrosse games, round-robin tennis matches, and a memorial service, officiated by Richard Morgan '59 and Suzanne Nolan '69 in Founders Chapel. Children's activities included kids robotics and Father's Day gift-making projects in the PHI, mini golf and other games on Grubbs Quad, and swimming in Hedges Pool. Childcare on Friday and Saturday evenings enabled parents to enjoy their classmates while the kids were entertained as well.

The culmination of Reunion events took place on Saturday night with class dinners followed by an all-class dessert and dancing under the tent in Grubbs Quad. Alumni bid each other farewell until next time at breakfast on Sunday morning.

Connect to a gallery of photos from Reunion 2019. 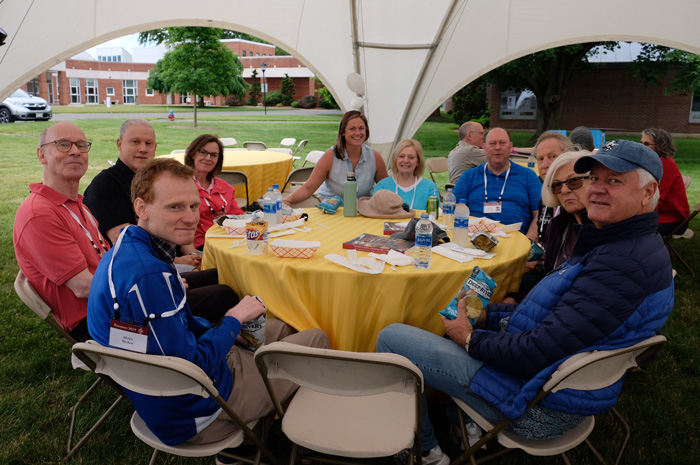