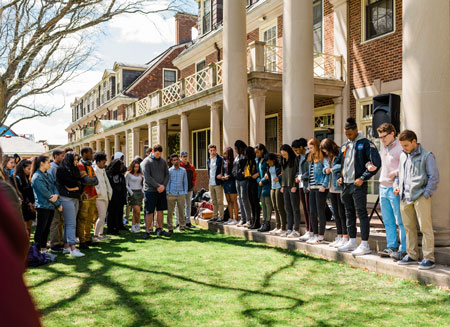 Loomis Chaffee students took action, speaking out publicly and passionately, about gun violence in America at several campus events and activities this spring.

Inspired by recent violent incidents, and the resulting student activism that garnered worldwide attention, Loomis students called on adults, lawmakers, and peers to take action to end the threat posed by guns in schools, homes, and communities.

Dozens of Loomis students in two separate groups joined March For Our Lives demonstrations in Hartford and Boston on March 24. March For Our Lives is a nationwide student-led movement in support of tighter gun regulation. Thousands of teenagers, including students from Parkland, Florida, site of the February 14, school shooting, marched on Washington, D.C., and in cities across the United States.

A group of Loomis students interested in anti-gun activism spoke via video-conference with students at the Riverside Military Academy in Gainesville, Georgia, on April 12. During the early morning discussion, organized by Norton Family Center faculty and members of the Riverside Academy faculty as an opportunity to listen to others with opposing views, the dialogue was at times intense, but remained respectful.

On April 20, in an entirely student-organized initiative, hundreds of Loomis Chaffee students joined students nationwide in the National School Walkout to protest government's failure to protect students from gun violence on the 19th anniversary of the Columbine High School shootings. The students who chose to walk out of class gathered in front of Palmer Hall in Grubbs Quadrangle to listen to impassioned student speeches, spoken-word poetry, and musical performances on the topic of gun violence in schools and in American society.

Program organizers, including seniors Caroline Colao, Cathy Hyeon, and Blaine Stevens and sophomore Anya Sastry, each spoke at the hour-long event. The speakers shared their personal perspectives and experiences regarding gun violence as it relates to school safety, race, and domestic or misogynistic violence, and they called upon their peers to take civic action, look after each other, and work together to become the generation of change.

The rally organizers also invited other students to speak or perform at the event. The program included brief speeches from P.R.I.S.M. (People Rising In Support of Multiculturalism) seniors Arman Henry, Robert Lotrek, Chelsea Offiaeli, and Amaiya Parker; a performance of an original spoken word expression by sophomore Oumi Sowe; a vocal duet performance by freshmen Loren Jones and Simone Moales; and an appeal for solidarity and respect for others' views, regardless of political leanings, from seniors Aidan Murphy and Jack Costello.

"We are the change-maker generation," implored Blaine, the final speaker of the event. "Just as Loomis Chaffee ... was built upon the grief of our Founders, the grief we now feel for those lost [to gun violence] will allow us to take meaningful action against the injustices we face," she concluded.

The walk-out program ended with a one-minute, 13-second silent pause to remember the Columbine victims and to reflect upon the many other lives affected by mass shootings and gun violence.