“I was totally hooked from the second I visited.”

John Howley loves the performing arts, so he knew participating in these activities would be a big part of his Loomis experience. He sang in the choir and audition-based Chamber Singers and A Cappelicans, and performed in Loomis’ Norris Ely Orchard Theater (NEO), with roles that included the title role in Macbeth, Lord Farquaad in Shrek the Musical, and Grandma in the musical The Addams Family.

When asked how he grew as a performer at Loomis, John points to the improvement in his skills and the training he received from the arts faculty. “It almost feels like you are in drama school,” shares John, reflecting on his work with theater director David McCamish. John is also quick to credit his peers. “I learned a lot by just standing next to that person in choir class or having a scene with that partner. I was constantly challenged by the people around me to meet their level, and that just kept me thriving.”

As John sees it, the Performing Arts Department is a “melting pot” of incredibly talented, multifaceted, and accepting kids. John’s own myriad interests extended beyond the arts to journalism as a writer for the school newspaper, The Log, and as a member of the Shultz Fellowship, a political discussion group named after former U.S. Secretary of State George Shultz ’38.

Gomez, Morticia, and their whole loveable, ghoulish clan wrestled — and sang and danced — with the challenges of change in The Addams Family, a student musical production in the Norris Ely Orchard Theater last week. 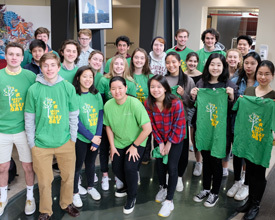 The Shultz Fellows led an evening conversation focused on ways to engage in civil discourse about sometimes divisive political issues.

Watch John make a special appearance as Grandma Addams as he's interviewed by Eric LaForest, director of the Norton Center for the Common Good, for the student variety show, In the Loop.


Are you ready to continue your journey?