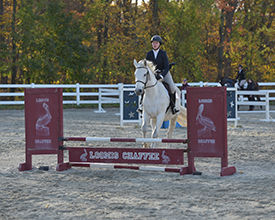 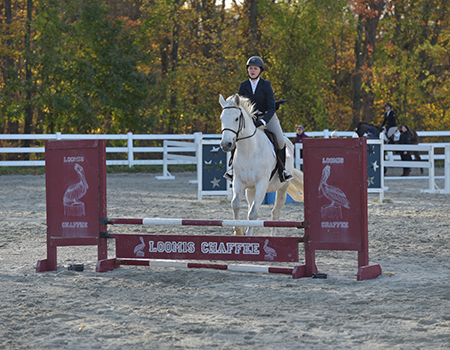 On Saturday, October 27, the Loomis Chaffee equestrian team traveled to Stoneleigh-Burnham School and won their third consecutive horse show of the season. Despite the cold weather and rain, the team was in good spirits and started the day off strongly.

In the Open division, junior Mia Griffiths, senior Liam Scott, and sophomore Haven Low finished third, fourth, and fifth respectively out of 11 riders in the over-fences class. Haven Low followed that performance with a great ride in the under-saddle class to finish third. The performances from these three riders boosted Loomis to the top of the standings and allowed for younger riders to compete without too much pressure.

In the intermediate division, after a frustrating ride in the over-fences competition, sophomore Olivia Looram bounced back to earn a well-deserved first place finish on the flat. Then, sophomore Elodie Kimm helped seal the deal for the Pelicans by finishing a very impressive second and first in her classes.

In the last parts of the show, Andrew Zhang finished fifth in a competitive walk, trot, canter division, and Cate Hughes enjoyed a fantastic debut in the show ring, displaying confidence and calm in her first-ever performance.

Back to All Athletics News