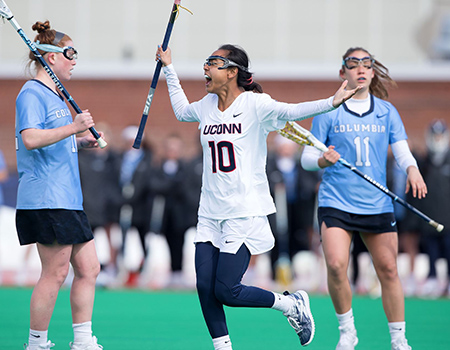 University of Connecticut women's lacrosse freshman Lia LaPrise '18 earned two American Athletic Conference awards this week when she was named to the All-Conference Second Team and was selected as AAC Freshman of the Week.

LaPrise secured her All-Conference nod after ending her freshman campaign second on the team in scoring. She put up 20 goals and a team-high 17 assists for 37 points. She also ranked third on the team in groundballs (25).

She earned Freshman of the Week honors after posting a team-high five points against East Carolina University in the team's season finale, which UConn won 17-7.

At Loomis, LaPrise was a four-year letter winner and starter on the girls lacrosse team, was named a two-time First Team All-America selection, and helped the team earn the 2015 and 2017 Western New England Championship title. She served as a captain her senior year.

LaPrise was also a four-year letter winner and starter for the girls varsity soccer team and led the program to back-to-back New England Class A Championships, serving as a captain her senior year. She received Loomis Chaffee's 2018 Barbara Erickson Senior Athlete Award.

Back to All Athletics News