Math is Definitely for Girls 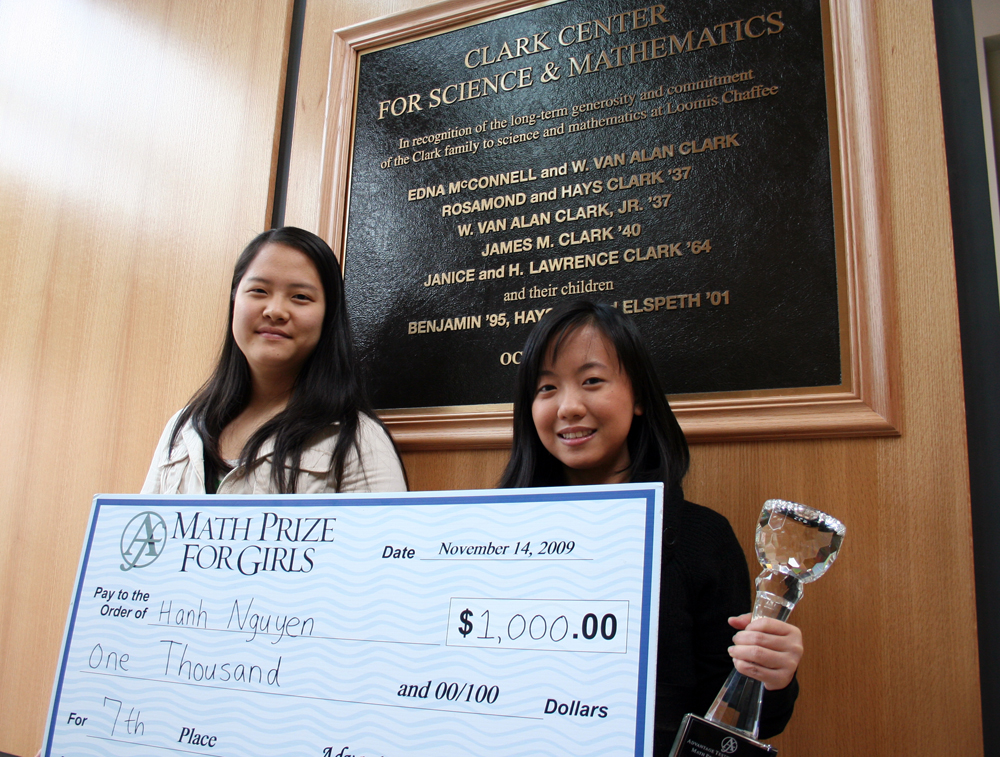 Loomis Chaffee junior Ye Dam Lee loves mathematics. Last year she qualified for the highly prestigious American Invitational Mathematics Exam, and this past summer she participated in the PROMYS (Program in Mathematics for Young Scientists), a camp for talented math students. While there, she learned about the Advantage Testing Foundation’s Math Prize for Girls and convinced fellow Loomis Chaffee student, senior Hanh Nguyen, that the two of them should participate. Also a math whiz, Hanh was a quarterfinalist for the U.S. Physics Team last spring.

With guidance from Loomis Chaffee math teacher and Math Club adviser Kathy Pierson, the two girls boarded a bus to New York City in early November and joined 237 high school girls from across the United States. They took the two-and-a-half hour exam that included 20 complex problems in algebra, geometry, trigonometry, combinatorics, and number theory. “I decided to take part in the competition because I wanted to learn more about math and have fun. Indeed, I had a lot of fun doing math and meeting other girls with the same passion,” said Hanh.

“The goal of the exam is to endow young women with exceptional potential to become the mathematical and scientific leaders of tomorrow,” said Dr. Ravi Boppana, Math Director at the Advantage Testing Foundation and primary author of the exam. “The topics may be standard for high school, but the problems certainly aren’t. Even our simplest problem is too hard for a test such as the SAT.”

When it was over, Hanh placed seventh and won a prize of $1,000. “It was a pleasant surprise for me,” she said. “I tied for 5th place with two other girls and I was very nervous as I had to do a tiebreaker on stage. There was a lot of time pressure, as we had to give the correct answer but also to finish it the shortest time.”

“The problems were certainly challenging and actually harder than the AIME exam,” said Ye Dam. “But they were interesting and involved and I plan to go over the questions again and see how I could have done better.”

According to Ye Dam, “The best part of the day was during the awards ceremony when one of the speakers said ‘let’s create a future where you girls aren’t just girls who like math, but mathematicians who happen to be female.’ That’s a thought that I can really keep with me.”