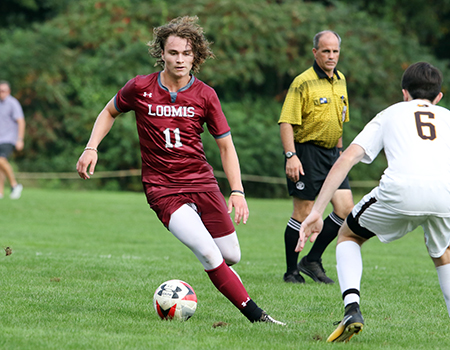 For the second year in a row Michael Suski, who graduated from Loomis Chaffee in May, has been named the Connecticut Gatorade Boys Soccer Player of the Year.

The award recognizes "outstanding athletic excellence, but also high standards of academic achievement and exemplary character demonstrated on and off the field."

As Connecticut's honoree, Michael will be considered for the national Gatorade Player of the Year award.

As part of the award, Michael will choose a youth sports organization to receive a $1,000 grant through the Gatorade Play It Forward program.

During last fall's season, Suski scored 22 goals and tallied 11 assists for the Pelicans, leading the team to its second straight appearance in the New England Prep School Athletic Conference Class A Tournament. Suski is a three-time First Team All-State selection and finished his high school career with 81 goals and 45 assists. Last year he earned the Connecticut Gatorade Boys Soccer Player of the Year after posting 40 goals and 12 assists.

Read Gatorade's official press release about Michael and the award and check out winners from other states.