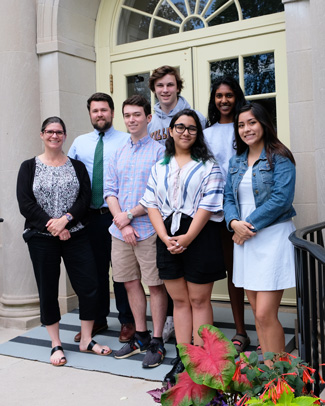 The Norton Family Center for the Common Good kicked off a fourth summer of the Norton Fellowship Program on Monday, June 3, with overviews of the five student-directed, community engagement projects planned for this year.

The fellows, four juniors and one sophomore, described their plans and shared their goals with each other and Norton Center faculty members.

Junior Wilder Burris-Wells will help young learners to develop their own basic smartphone applications at a summer camp he is organizing for kids in his hometown of Williamstown, Mass. Wilder, who has developed his own apps, hopes that the program he creates can be adapted for students on the Loomis Chaffee campus.

Junior Ethan Levinbook, an accomplished cello player, plans to expand upon an after-school music mentoring program he started in 2017 to help local children who take instrumental music in school. With support from the Norton Fellowship Program, Ethan will be able to extend his instruction to students who do not already have access to instruments, who have never taken music lessons, or who want to continue school-year lessons through the summer.

Sophomore Kassie Rivera plans to organize a peer support group in New York City for siblings of people with autism spectrum disorder, which is characterized by challenges with social skills, repetitive behaviors, speech, and nonverbal communication. Kassie, whose brother is autistic, says growing in a household with an autistic sibling can pose some challenges. Kassie is not aware of any support groups organized specifically for siblings of people with autism, so she plans to set up meetings in her New York neighborhood where she and others who have autistic siblings can share experiences and learn more about the disorder. Her hope is to promote understanding of autism in the greater community.

Junior Anya Sastry, a student activist for social justice and environmental concerns, plans to produce a documentary film examining the impact of climate change and environmental injustice on underprivileged and marginalized communities. She plans to screen the film at Loomis next January during the week when the school honors Martin Luther King Jr. and his legacy.

Junior Alejandra Velasquez will partner with the Hartford Police Athletic League (PAL) and its summer program for inner city and at-risk youth to provide a filmmaking course for young people enrolled in the PAL program. Alejandra, who lives in Hartford, hopes to teach filmmaking and storytelling skills as well as promote leadership skills and encourage a sense of civic pride in young people living in the city. She plans to share the films with the Loomis community when she returns in the fall.

As part of Monday's kickoff meeting for the fellowships, Norton Center faculty members Eric LaForest and Molly Pond, who oversee the program, gave the students some practical advice about managing their time, staying connected to the Norton Center faculty, and dealing with budgets and finances. Eric LaForest, the Keller Family Director of the Norton Center, and Molly Pond, associate director, said that they were pleased by the number and breadth of student proposals this year, and that it was difficult to choose from the many worthwhile project proposals. They said they are looking forward to hearing about the fellows' discoveries and experiences during the four- to six-week summer projects.

Connect to the Norton Center page of the Loomis website to learn more about the Norton Fellowship Program.